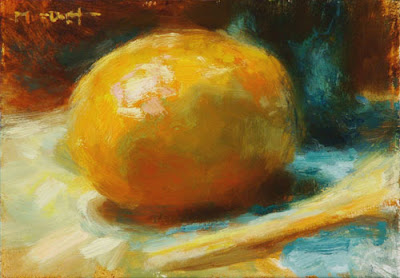 John's work has been shown in the United States and in Europe. His work has been displayed at the Ellarslie Museum in Trenton, The Lancaster Museum of Art, The Ernst Museum in Budapest, and at Mercer County College. John has been featured on “Vox Artis”, a television program featuring central New Jersey artists, and on Kulturalis Magazin, a nationwide television program in Hungary. Articles featuring John and his work have appeared in American Artist Magazine, International Artist Magazine, The New York Times, The Times, The Asbury Park Press and Time Off Magazine. John is currently showing work at Gallery Piquel in New Hope, Pennsylvania.

He works in traditional portraiture and still-life with an otherworldly edge. John uses oil paint, often hand ground, on canvas or wood panel. Gold leaf is often used in backgrounds. His portraits dignify the sitter. His still- lifes range from very classical to surreal with either style emphasizing organic objects.

John was born in Oak Lawn, a south suburb of Chicago, and has lived in California, Arizona, Washington, New Jersey and Minnesota. He now lives in Holicong in Buckingham Township, Pa. and maintains a studio and school there.