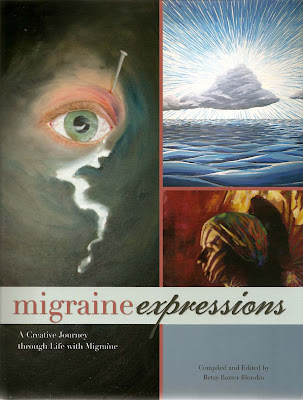 Drawing and painting images for clients has been Heather Davulcu’s business for over 13 years as a mural artist in Austin, Texas, then in Wilmington, Delaware and now here in Yardley. She works with clients all over the Philadelphia region as well as many in New Jersey.

Bringing her clients ideas to reality through her artwork has been a joyous business, however when daily chronic migraine struck after the birth of her children Heather sought to relay her emotion and pain through art. Heather felt there was no other way to communicate her pain and frustration. During many bouts of severe migraine Heather kept a notebook and sketched out her feelings. These sketches later became the framework for art that tells her story. After many years, lots of research, hundreds of medications, and literally dozens of doctors Heather chose to have a full hysterectomy. While this doesn’t work for so many patients, for Heather it was the beginning of a new and pain free stage of life. With her life back and her love of painting renewed she began to take those sketches and create artwork that could convey those dark days.

Learning to express emotion through her artwork has been a blessing, and now in an effort to connect with other migraineurs, Heather’s work can be seen on the cover of a new book entitled Migraine Expressions, by Betsy Blondin. Migraine Expressions is a compilation of poetry, prose, and artwork created in an effort to communicate the difficulties and desperation of living with migraine. In addition, a mixed media piece entitled “Don’t Let them Know” is feartured on the cover of The Journal of the Canadian Pain Society’s Pain Research and Management May/ June 2008. Heather is thankful that those years she felt were lost, have been found through the expression of pain in her artwork, and it is her fervent desire to connect with other sufferers through her art.
Posted by Reeky at 1:51 PM